If you would like to be sent our quarterly newsletter, please complete the following form. We value your privacy, and will not use your details for any other purpose nor pass them on to third parties.

Here are some of the sites we have found that may help you getting a better understanding of Osteoporosis, management and treatment, bone health and fracture prevention.

Please be careful relying on the Internet as a health information resource and always speak with your GP about any treatment you are considering taking up or discontinuing.

What is a bone density test?

The DEXA (Dual Energy X-ray Absorptiometry) measures your bone mass. This measurement can help your doctor determine whether you need medication to help maintain your bone mass, prevent further bone loss and reduce fracture risk. It measures the hip, spine or the entire body. It works like a chest or dental X-ray. It is quick, safe and easy. You simply lie on a cushioned bed while a scanner arm passes over your body. The entire process takes about 20 minutes. A bone density test is the only way to diagnose osteoporosis and determine your risk of future fracture.

Preparing for your test is easy. You may eat and drink as usual before you visit, but you should not take any calcium supplements for 24 hours before your test. 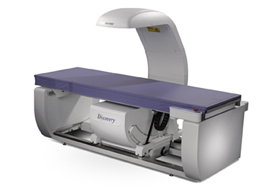 Currently Osteoscan is a free service to over 95% of its patients.

From April 1, 2007 Australians over the age of 70 will be able to claim bone density tests under Medicare’s new guidelines. Previously a person has had to show signs of osteoporosis and/or suspected fractures to be tested.

The Federal Fovernment will extend the Pharmaceutical Benefits Scheme (PBS) to include the drug alendronate from April next year. Osteoporosis sufferers aged 70 and over will also be able to claim bone density tests on Medicare.

“The two measures will put Australia at the forefront of fighting this enfeebling disease,” Mr Howard told residents of a nursing home at Marsfield in Sydney’s northwest.

Health Minister Tony Abbott said the measures were a sensible pursuit of prevention rather than cure. Nearly two million Australians suffer from osteoporosis, which causes fragile and brittle bones and a higher risk of fractures.

Osteoporosis Australia chief executive Judy Stenmark said preventing the first fracture was a vital step in treating sufferers. “Research tells us that once a person has sustained their first osteoporotic fracture they are five times more likely to refracture, so preventing that first fracture is very important,” she said.
December 18, 2006

To obtain pharmaceutical benefits for medication you currently
need to show diagnosis of an osteoporotic fracture. If referred by
your doctor, Osteoscan will perform a low dose Digital Spinal X-Ray
that can diagnose fractures and confirm eligibilty.

Parathyroid hormone is not available on the Pharmaceutical Benefits Scheme (PBS) and can not be used for more than 18 months. Hormone Therapy medication is available without a fracture being diagnosed. Strontium ranelate is not yet available in Australia. It is important to take medication exactly as prescribed to get full benefits.

Note: Medicare and PBS eligibility is subject to changes in Government policy

OSTEOPOROSIS
T-score at or below -2.5

SEVERE OSTEOPOROSIS
T-score at or below -2.5 with one or more osteoporotic fractures

Report for your doctor
A full report will be sent to your doctor within a week of your test.

Monitoring your osteoporosis
Changes in bone density can be detected 6-12months after a previous scan. This is the only way to see if your bones are improving or becoming weaker. It is advisable to have subsequent scans on the same DEXA machine to ensure all measurements are consistent. All Osteoscan machines are calibrated uniformly to ensure all results are consistent and comparable.

Follow up scans
After your initial bone density test changes in bone density can be detected 6-12 months apart, If you require a repeat scan, it is advisable to return to the same testing facility to ensure that subsequent measurements can be compared to the initial test, and an accurate measurement of the change in bone density be assessed.

Falls are the most common accidents older people have. To reduce the risk of having a fall, be aware of the possible causes or risk
factors and avoid or modify them if you can. Some medicines or combinations of medicines can have an affect on your balance, vision or mental alertness. Falls can also be a sign of an undiagnosed medical condition such as low blood pressure or stroke. Your home may also have possible hazards, for example loose mats or uneven paving or walkways.


Basic Google Maps Placemarks error: JavaScript and/or CSS files aren't loaded. If you're using do_shortcode() you need to add a filter to your theme first. See the FAQ for details.


Basic Google Maps Placemarks error: JavaScript and/or CSS files aren't loaded. If you're using do_shortcode() you need to add a filter to your theme first. See the FAQ for details.